With churches and bells a firm feature in Le Tour de France, it may come as little surprise that bellringers feature in one of the central panels of The Bayeux Tapestry.

Scene 26 sees the funeral of Edward the Confessor and the disputed coronation of King Harold. Edward, being a descendant of Norman family, had named William of Normandy as his successor. Despite having himself conveyed that message to William, Harold nevertheless claimed the crown upon Edward’s death. The Tapestry tells a fuller tale of the events leading to the Battle of Hastings. 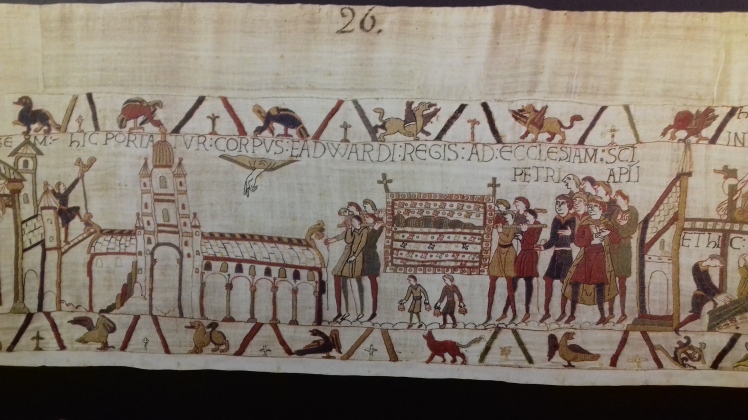 The bellringers seen at Westminster Abbey are ringing hand bells, but fans of tower bells should fear not. Bayeux Cathedral currently hosts a display of its new bells and the adjacent Museum of Arts houses the oldest bell in France, Le Cloche de Fontenailles.

In the photos below, taken of the Cathedral display, we see the bell Therese Benedict being hosted to the tower.