How hard can it be to play a single note? Well we were up for the challenge….

Most musicians learn pages and pages of complex pieces, with lots and lots of notes.

This was to be the prelude to international concert pianist, Kathryn Stott, playing a piece specially composed by the brilliant Dave Nelson, while sat at a grand piano, on a “pianoporte” while being pulled by a line of cyclists up the 5 mile climb of Cragg Vale.

This was The Grand Departs – a ludicrously wonderful event at the heart of the Yorkshire Festival 2014. And we were part of the composition for this piano piece.  We were the warm up act, as it were.

We walked past the BBC One Show TV crew (well OK we did loiter with intent a bit) and we took stock of the fantastic stalls of local artists in the church hall, and then we opened the tower shortly after 10am. We were delighted to welcome several folk of all ages up the few short steps to the belfry.  We were equally delighted to shake hands with a new batch of potential ringers of the future as they set off, half an hour later, back down to the festivities around the pianoporte.

Here’s a sample of the photos of the day.  And the composition we rang…

It promised to be a good day as we passed through the village of Friendly….

We were soon in the lens of the TV cameras.

Now for business.  The band was formed.  Let’s open the door to the world outside…

Ah we have a visitor.  Come and have a go #bepartofit

Here’s the link to our magnificent piece (with background roars from the crowd) on Derek’s website. 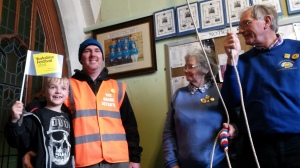 It was a big crowd outside. The BBC One Show crew in the thick of the action. Everyone wanting to see the cyclists and to hear Kathryn Stott. 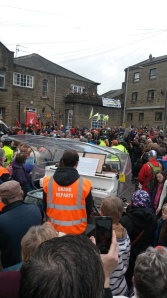 And here she was….

Comfortably seated at her grand piano, with an aerodynamic rain shield, carried aloft on the pioneering “pianoporte”, with 18 cyclists at fixed pairs of bikes in front of her.  We were off.  (Confession, yes I did run up Cragg Vale shouting “allez allez allez” wearing my polka dot shirt just like those folk you see on Alpe d’Huez) 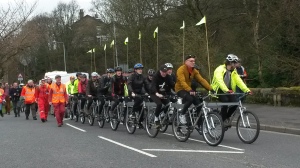 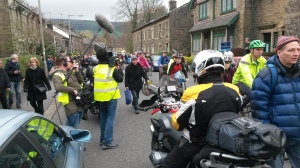 The obligatory “bells and bikes” photo of polka dots and tower….. 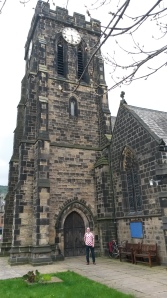 And what better way to wrap up the day than Little Valley Brewery’s Cragg Vale Bitter.

The Grand Departs featured on the BBC One Show on Monday 8th April.