Listen to church bells on BBC Radio Sheffield via the link below. (1:39:15)

In 2014, church bells took centre stage in the Tour de France Opening Ceremony and all along the race route.  We now have the chance to do it all again in 2015.

The 2015 Yorkshire Festival runs from 1 April to 3 May, concluding with the Tour de Yorkshire pro-cycling race from Friday 1 May to Sunday 3 May.

Click above to listen to Rod Ismay talking to Paul Walker, live on the BBC Radio Sheffield Breakfast Show.  Rod’s interview starts at 1:39:15, including a recording of Yorkshire Surprise Major.  Rod’s interview is preceded by the Yorkshire Festival Director, Mark Fielding, discussing the broader festival from 1:37:50

St Martin’s Coney Street rang out for the start of Stage 2 of Le Tour de France 2014.  Watch and listen via the rooftop clip below.

The bells were played by hammers as the ringers watched the cyclists pass by.  The crowds looked up at us and the TV helicopters looked down on us.

The church hosted an Open Day all day – loads of people came along to have a go at bellringing, to enjoy the wonderful refreshments and quite simply for another really welcoming part of a great day.

BBC Look North reported on the Opening Ceremony in their late night bulletin. Their coverage included Gary Verity’s reference to ringers in his hosts speech. In this news piece, BBC camera crew had filmed the Leeds Minster band ringing at the designated welcoming time of 8.20pm on the 3rd of July.

BBC Radio York. Earlier in the day, Martin Davies (Ringing Master of Ripon Cathedral) was interviewed on the Elly Fiorentini drive time show. Martin’s interview starts at around 1:35:30 on the player.

And of course, bellringing at Cawthorne, Masham, Chapel Allerton and Ossett was seen by over 10,000 people in the Opening Ceremony itself at the Leeds FD Arena.  In the actual broadcast, a number of sections had to be reduced and bellringing was not therefore in the final broadcast on the evening. However, we will enquire as to whether, how and where the whole ceremony film may be shared.

As we approach the final week before Le Tour de France, we have a double bill of Yorkshire bells on the way for you.  Two towers, both on the race route.

On Sunday 29 June we have Chapel Allerton. 6 bells. 7cwt in B flat.

The York broadcast will be on the very morning that Le Tour starts Stage 2 in the city of York.

The Yorkshire Grand Depart Opening Ceremony promises to be the grandest opening in the Tour’s history, with global rockstars, cycling heros, international media and church bellringing.  I mean could you ask for more.

Here are a few websites with more news about the Opening Ceremony to help you understand the scale and significance of it.  As bellringers it is a huge privilege for us to be able to play a part in supporting this massive event as we welcome Le Tour de France to Yorkshire.

Executive producer Martin Green, who was Head of Ceremonies at the London 2012 Olympics, said: “We’re breaking new ground here for the Tour de France with this ambitious show – it’s something much bigger and completely new to the cycling world.  With the theme of the event The People of Yorkshire Welcome the World, this will give the riders the entrance they deserve as the Yorkshire Grand Départ celebrations begin.”

Small? Medium? Large? No, it had to be 5 square metres for Skipton Church.  Love it. Maillot jaune. 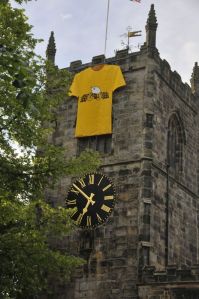